How Much to Spend on an Engagement Ring? Average vs Actual

Whether you can afford to go all out and spend €300 or €300,000 on an engagement thing, it’s a purchase that will be cherished for life.

For anyone in Ireland or indeed anywhere else around the globe considering popping the big question, you might be wondering how much to spend on an engagement ring?

As expert jewellers in Ireland, we’re going to discuss whether you should be spending huge amounts or whether it’s all down to your taste and budget as a couple.

Let’s find out the short answer first, so you can start the exciting planning stage for a life of commitment together.

Although many people follow the De Beers guide that an engagement ring should cost one month's salary, in a recent poll the majority concluded the cost should be whatever fits your budget. Most people spend on average €2100. Some couples choose alternatives to a solitaire.

So now we’ve seen the mini takeaway, so we can understand a little more easily how much to spend on an engagement ring, let’s start by looking at the average cost of the symbol of your commitment. 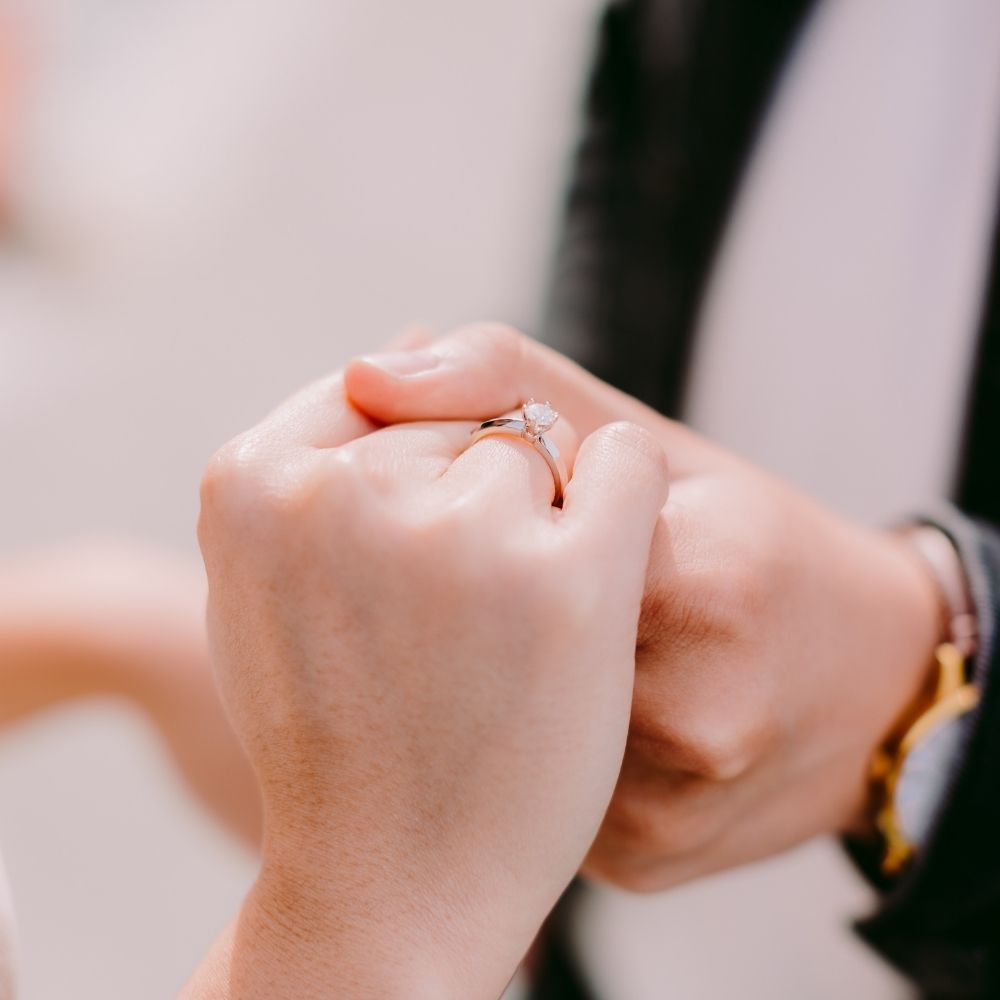 How much are people willing to spend on an engagement ring?

So we don’t need to tell you that buying an engagement is a huge decision!

However much money you have in your engagement ring budget, your loved one will likely wear it on their ring finger forever.

So it’s not surprising that many people wonder how much to spend on an engagement ring in Ireland or anywhere else in the world!

According to a recent poll in The Independent, it was uncovered by those who took part in the study that the overall consensus was to spend what you can afford.

The largest segment voting in the poll stated you should pay only “what you can afford”. This was a huge majority coming in at 41% of all voters.

“The overall consensus was

to spend what you can afford.” 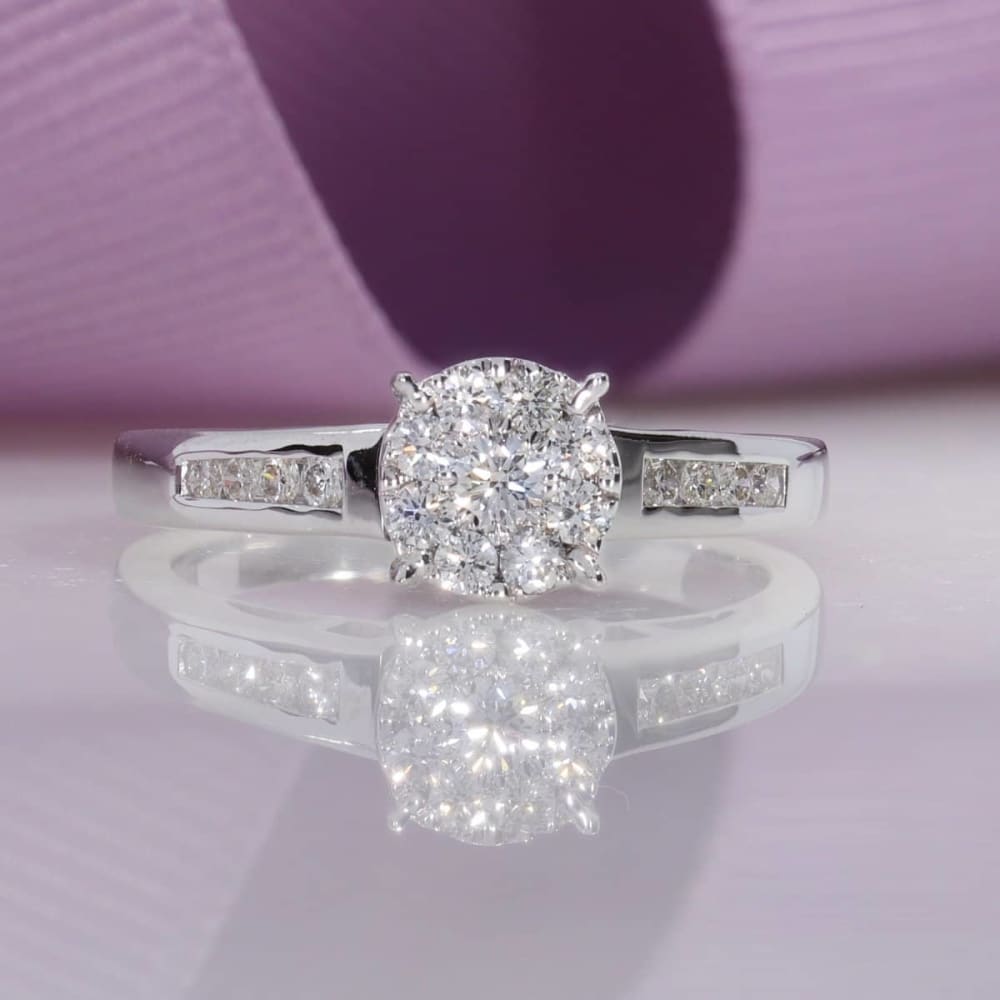 Secondly, it was discovered that most people are prepared to pay one month's salary, similar to the DeBeer guide.

So based on figures from the CSO that weekly wages in Ireland amount to just over €864, it seems the average amount some are prepared to pay for an engagement ring is around €3,400

This is obviously just what a sample of people are happy to pay and not a hard and fast rule, but it does seem as if it’s a popular choice amongst those making a commitment to each other by getting engaged.

So what exactly is the De Beer Guide and how does it affect what some couples think they should be paying for their engagement rings?

“However much money you have in your engagement ring

budget, your loved one will likely wear it on their finger forever.”

Read on to discover more.

What is the De Beers Guide?

In America’s Midwest way back in the 1930s the idea of spending your monthly salary on an engagement ring was a marketing ploy dreamed up by the De Beers diamond group.

Due to the financial squeeze of The Great  Depression, they needed to claw back lost finances, especially as they controlled around 60% of all diamond production.

This campaign was the brainchild of their marketeers and became a part of popular culture that is still around to this day.

In fact, this marketing calculation of how much you need to spend on an engagement ring became more ingrained as time went on.  During the boom times of the 80s, advertisers on board with the De Beer calculation added a sneaky extra month to make it two months' salary!

The whole engagement theme was further cemented when one of the most popular taglines of all time ‘diamonds are forever’ was added into the mix.

So if you are thinking that your budget has to extend that far, then you might be pleased to know it’s not a set-in-stone requirement for all soon to be married couples!

“spending your monthly salary on an engagement ring was a

marketing ploy dreamed up by the De Beers diamond cartel.”

What’s the average cost of an engagement ring?

So you might decide how much to spend on an engagement ring by finding out what the average spend for others is.

As with every aspect of a wedding and its traditions, Setting a budget for a ring is a personal decision for each soon to be married couple.

There are many different prices for wedding rings costs. They can however vary considerably from around $1800 through to hundreds of thousands!

For instance, according to a poll by Weddings Online it was found that 25% of Irish customers surveyed buy engagement rings between €2000 and €3000. Interestingly the majority would be happy to spend up to €5000.

This will of course depend on the style of ring you are buying. Whether you choose a beautifully made traditional solitaire, a lab-grown diamond, or whether you go for a more contemporary option. 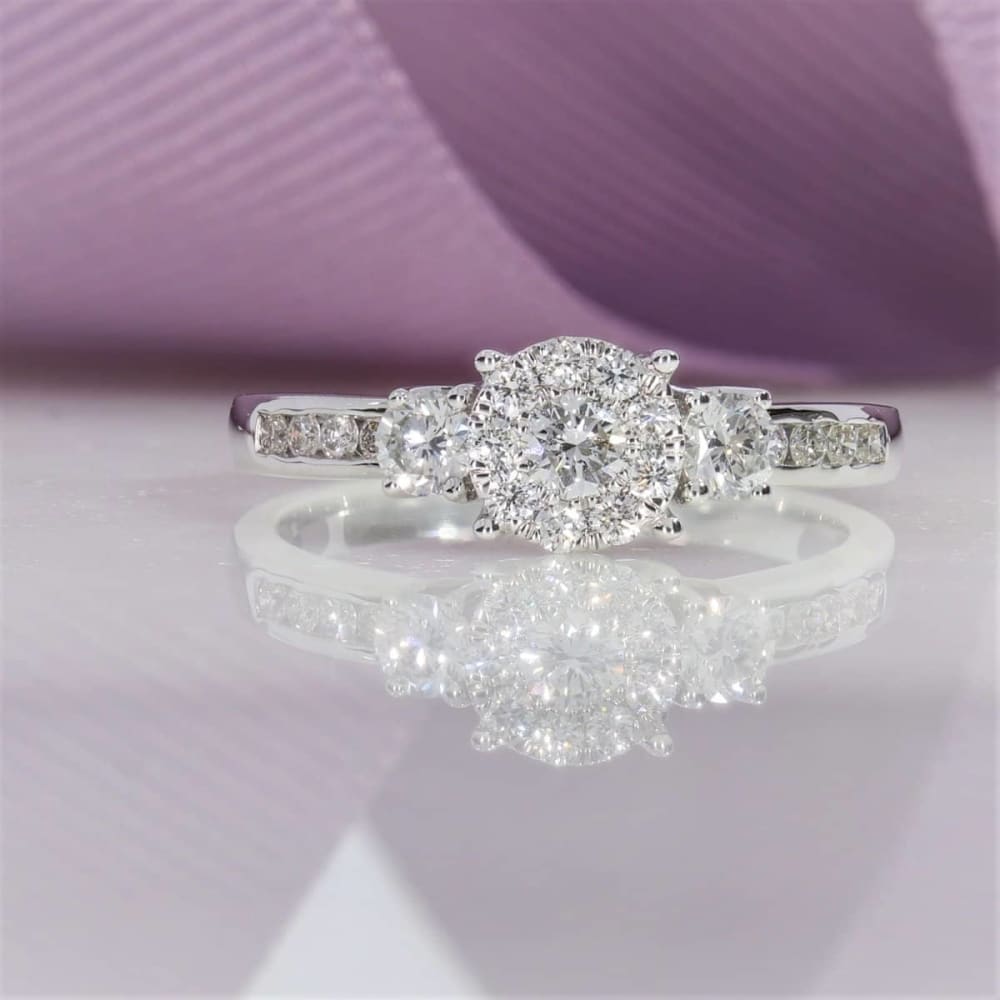 Here’s a quick summary table which includes some cost expectations, and averages.

So do you have to buy a traditional engagement ring or are there any alternatives?

Although for many years, diamond rings have been the go-to engagement gemstone for most people there are other ways other than choosing a traditional diamond engagement ring to express your love for each other.

In recent times, there has been a move by some to break with tradition and perhaps look at a different type of ring to show commitment to each other.

Age-old traditions of a solitaire ring being the only choice for a celebration of your commitment to getting married are sometimes being discarded by some. Both men and women are choosing rings that might fit more closely with their personal styles.

Everybody has a style that is unique to them and sometimes diamond rings might not work with you and your partner’s everyday style.

It might be for instance, that you might consider a lab-grown diamond, which is becoming a more and more popular choice for couples. Make your choice based on both your individual choice and the budget you have.

Ultimately It all comes down to what you as a couple prefer.

The love between two people is not dependent on how much you’ve spent. It’s the statement of love between the two of you which is more important.

“Make your choice based on both your

individual choice and the budget you have.”

So there you have it! Everything you needed to know about how much to spend on showing your true love that you want to cherish them dearly...for the rest of your life.

Remember an engagement ring doesn't have to be a beautiful diamond with a price tag to match, it can simply be an individual expression of your commitment to each other, whatever your budget.

For those of you who are looking to buy the most exquisite engagement rings, don’t forget to head over to discover our beautiful selection of the finest luxury engagement and diamond rings, or book an engagement ring appointment in our stunning Dublin flagship store.

Types of Rings and Their Meanings: Top 10 Most Popular

When to Give a Promise Ring: Timing, Reasons, and What to Say

What Does an Engagement Ring Mean to a Man? The Real Meanings

This article will show what an engagement ring means to a man.
Read More